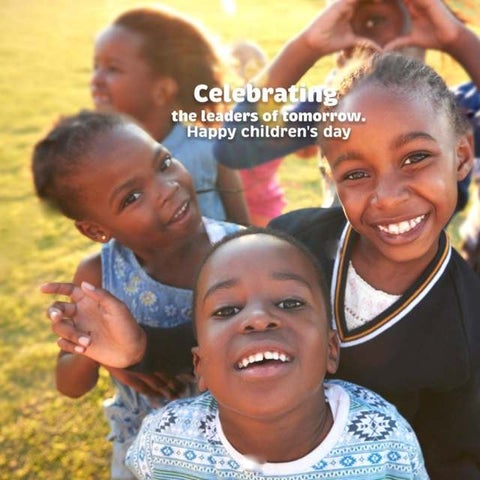 Children’s Day: Feed their potential as leaders of tomorrow-

Children are the telescope into a beautiful future, the substance of an unending hope, the sure sign that the best is yet to come. Through their eyes, we see the window of endless possibilities, and from their intellectual curiosity, we see the courage that makes the world a better place. We long to see them fulfil their potentials, to help them grow smart and be ready to take on the challenges that would become stepping stones to greater heights.
We hear our children speak without flinching, “I’m going to be the best Doctor, I’m going to be the finest of Pilots, I’m going to change the world for good, and a long list of specific dreams, goals and ambitions that aim at making the world a better place.” As they grow, they are exposed to a number of factors that determine if they hold on to and become all they aspire to be. It isn’t so much as to what they are exposed to, but much more on how they respond to their experiences and adapt to an ever-changing world; this we regard to as “intelligence!”
According to the National Institutes of Health(NIH), intelligence is a complex human trait that is influenced by both genetic and environmental factors and although most studies are inconclusive, they broadly lean on environmental factors as a bigger influence in a child’s intelligence over genetic factors. Some environmental factors include a child’s home environment and parenting, education and availability of learning resources, nutrition, among others.

Nutrition plays a vital role in the intelligence levels of children and will determine the effectiveness of the other environmental factors that also determine intelligence; There are brain-supportive nutrients that help in brain development of children and by extension, intelligence levels
Research shows that 90% of brain growth and crucial aspects of its development occurs in the first 5 years of life and this is a critical window of opportunity to maximize a child’s learning potential through nutrition. The role of nutrition cannot be overemphasized! Docosahexaenoic acid, or DHA, a major building block of the brain, is a key nutrient needed for optimal brain growth and development. DHA is an omega-3 fatty acid and is plentiful in oily fish, such as salmon. The human body can only make a small amount of DHA from other fatty acids, and thus the need to consume it directly from food or supplements.
Several studies have shown the link between DHA and better school performance. Some studies done by Bryan J. et al 2004 and Kuratko et al 2013 showed that improving DHA status contributes to brain development by supporting these parameters: visual recognition, positive effects on motor skill development in early childhood, problem-solving ability, improvement in short-term memory, reasoning and cognitive speediness. Furthermore, the European Food Safety Authority (EFSA) also acknowledges the well-established role of DHA in brain function.
Most scientists agree that DHA plays an important role in brain development in a review of some 50 studies by McCann JC and Ames BN. This review concluded that higher DHA in children’s diets translates into better brain function, especially for cognitive and visual function which in turn translates into better school performance of children. Examples of DHA-rich foods include fish and seafood, poultry and eggs as well as DHA- fortified milk.
Milk has been known for ages as one of nature’s most nutrient-dense foods. Although worldwide dairy is seen to play an important role in nutrient security, we see that in some parts of Nigeria, children have little or no milk in their diet. You need to get your child covered through their formative years by giving them their age-appropriate milk that has been fortified with DHA and other nutrients crucial for brain development to support their learning ability and memory.

Peak 456 Growing-up milk is specially formulated with DHA and other key nutrients to support optimal brain development in children aged 4-6 years.
In the words of Anthony Lake, the sixth Executive Director of the United Nations Children’s Fund, “The children are tomorrow’s citizens, consumers, workers, thinkers, innovators and their abilities will drive tomorrow’s businesses. Their productivity will fuel tomorrow’s economies and their capacity will shape tomorrow’s society”.

As a smart parent and a smart caregiver, you definitely want to raise a smart child. Feed their potential with the right nutrition!