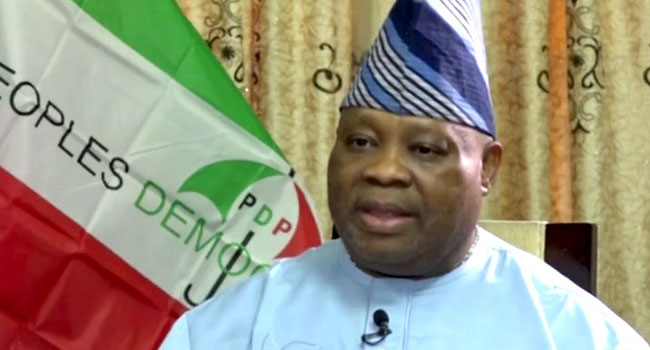 Adeleke spoke against the earlier announced Executive Order 3, 4 and 5, which stated nullification of employment, appointment made by former Governor Adegboyega Oyetola from July 17, 2022 till his inauguration and vacation of the throne of three monarchs appointed by past administration.

The order states: “All employments in the service of Osun State Government made in any capacity into any capacity in all the ministries, departments, agencies, commissions, boards and parastatals after July 17, 2022 are hereby nullified.

“All appointments in the service of Osun State Government made in any capacity into any capacity in the ministries, departments, agencies, commissions, boards and parastatals after July 17, 2022 are hereby reversed.

“All appointments of traditional rulers made by Osun State Government after July 17, 2022 are hereby ordered to be reviewed to ensure there was strict compliance with due process of chieftaincy declarations and native law, custom and tradition relating to such chieftaincies. In the case of Ikirun, Iree and Igbajo, to avoid further breakdown of law and order, the appointments of Akinrun of Ikinrun, Aree of Ire and Owa of Igbajo are hereby put on hold pending review. Subsequently, the palaces of Akinrun of Ikirun, Aree of Iree and Owa of Igbajo should remain unoccupied, while security agencies are hereby ordered to take charge.”

However, the governor through his spokesperson, Olawale Rasheed, speaking yesterday on a private radio station, Rave FM, in Osogbo, during a talk show programme, ‘Frank Talk’, said Adeleke had not sacked any worker.

He said the appointment and employment made by the Oyetola administration would be reviewed to ensure legality and due process, stressing that nobody had been sacked, the executive order was misquoted.

All Progressives Congress (APC) in Osun State has described the setting up of review panels by Governor Adeleke as an afterthought designed to arrive at predetermined outcomes.

The party urged the governor to settle down to study the handover notes, so as to prevent the blunders he was committing.

In a statement signed by its Director of Operations, Sunday Akere, APC said: “We told you from day one that these people have nothing to offer. We can all see from their first action that they are even confused.

“They had told us long time ago that they were coming to sack. They came and announced it. Why set up a panel after taking a decision? What they are doing can be likened to doing ablution after observing prayers. Who does that?”

Governor Adeleke has ordered the dissolution of non-statutory boards.

Spokesperson Malam Olawale Rasheed said in a statement that the directive was conveyed to heads of ministries, departments and agencies by Mr. Teslim Igbalaye, the Secretary to the State Government.

Conflict Between The Osun Assembly And Adeleke Over The State Name Change…     Globaltimes Nigeria reports that Osun Assembly has moved against Governor...

Hoodlums Ambush Campaign Convoy In Osogbo…     There was confusion on Tuesday as the convoy of Bolanle Jimoh, the Caretaker Chairman of Osogbo...

Globaltimes Nigeria reports that Gov. Adegboyega Oyetola of Osun on Saturday in Osogbo described a report linking him to the purchase of a property...