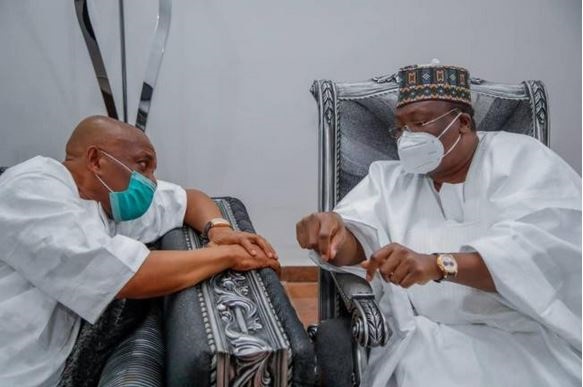 Senate President, Senator Ahmed Lawan has come under fire for leading his colleagues on a solidarity visit to the residence of Senator Orji Uzor Kalu who was recently released from the Kuje Correctional Centre.

The Centre for Anti-Corruption and Open Leadership, CACOL, blasted the Lawan-led leadership of the upper legislative chamber for playing to the gallery.

Senate President Ahmad Lawan, had on Thursday, led other Senators to the residence of the Chief Whip of the upper legislative chamber, Kalu, after the Abia lawmaker was released from prison during the week.

Kalu, who is the Chief Whip of the Senate, was released from Kuje correctional facility on Wednesday after spending months behind the bars for alleged diversion of N7.65bn while he served as the Governor of Abia State.

CACOL, in a statement to DAILY POST on Friday night by its Chairman, Debo Adeniran and signed by its Coordinator, Administration and Programmes, Tola Oresanwo, said the visit was a charade.

CACOL said, “The visit by the senate delegation headed by the Senate President is a charade, travesty and a mockery on the intelligence of common Nigerians.”

It further said that despite the horrible situation Nigeria has found itself, due to the lack of good leadership, the leadership of the Senate was not bothered by the menace of corruption that had stagnated the destiny of the country.

According to CACOL, by their action, the lawmakers have again brought Nigeria to the spotlight as a country whose leaders do not only celebrate corruption but are “fantastically corrupt” and have succeeded in making Nigeria a laughing stock among the comity of nations.

The anti-corruption group said it was laughable that the Senators would leave their statutory duties and embark on a wild goose chase in the name of a “solidarity visit” to the former Governor who was accused of “stealing his state dry when he was a governor of the state.”

“What exactly do they want to achieve by that visit, what are they telling the common Nigerians on the street that are not corrupt?” CACOL wondered.

The group also wondered what lessons the lawmakers were trying to pass on “or indirectly inculcating in the minds of our younger generation or aspiring politicians.”

“Are they telling us that corruption pays? Are they telling us that they were and are still with him in his struggles to escape the law from catching up with him? Is the solidarity visit meant to assure him (i.e Kalu) that come what may, his seat at the Senate will not be declared vacant? Or are they indirectly telling Nigerians that birds of a feather will always flock together, come what may,” the anti-graft group asked?

CACOL, therefore, demanded that the leadership of the Senate explain its action to let Nigerians know what they set out to achieve with the visit to Senator Kalu.

The group also called on the leadership of the Senate to always see their position as the representatives of the people of Nigeria whom they would have to report to at one time or the other.

CACOL said the Lawan-led Senate should not forget that their actions or inactions are being kept in record on the pages of history and that even generations yet unborn would read about all their activities.

“Moreover, members of the hallowed chamber ought to serve as role models and lead by showing good examples that the incoming generations can always learn from and not portray themselves as members of ‘big boys club’ that are always above the law,” CACOL said