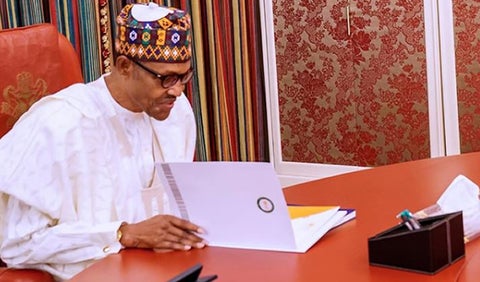 The Senate on Thursday justified the $5.513 fresh external loan request from the President, Major General Muhammadu Buhari (retd.), insisting that it would not be a burden to the country.

The National Assembly had in April this year approved N850bn domestic loan request of the President, to finance projects in the 2020 budget.
The loan was to be sourced from external lending institutions, but the arrangement was frustrated due to the outbreak of the COVID-19 pandemic.
The Senate had also, earlier in the year, approved another $22.79bn external loan request for Buhari, which was also meant to fund the total 2020 budget size of N10.5tn.

Surprisingly on Thursday again, Buhari sent another external loan request of $5.513bn to the two chambers of the federal parliament.
The Senate President, Ahmad Lawan, and the Speaker of the House of Representatives, Femi Gbajabiamila, read the letters during plenary, after a closed session with members on Thursday.
Buhari said the loan would be used to finance the proposed 2020 revised budget, some priority projects and other projects to support state governments.

He said it became imperative for the funding of the revised 2020 budget and insulating the nation’s economy from the yet-to-be-abated COVID-19 pandemic.
The sources for the loans, according to him, are the International Monetary Fund, $3.4bn; World Bank, $1.4bn; Africa Development Bank, $500m; Islamic Development Bank, $113m, among others.

The letter read, “As the Senate may be aware, the COViD-19 pandemic has resulted in economic and fiscal challenges for many countries.
“Nigeria has also been affected in this regard, especially with the lower demand for crude oil, which has affected our sales and the sharp decline in the price of oil below $25 per barrel, which is much lower than the $57 per barrel benchmark in the 2020 Appropriation Act.
“All of these have necessitated a review of the 2020 Budget and the Medium-Term Expenditure Framework (2020-2022).

“The draft revised budget proposed by the executive for 2020 has a higher deficit. In order to finance the deficit, the Federal Government is planning to raise funds from both domestic and external sources.
“For the external component, the government is negotiating with multilateral institutions for funding on concessionary terms.

“The facilities totalling $5.513bn, being arranged in this regard, are detailed below.”
Details of the projects were not made available to journalists, but both chambers of the National Assembly had referred the documents to their committees on local and foreign debts.

The committees are expected to submit their reports on Tuesday next week.
Addressing journalists after the plenary, the Chairman, Senate Committee on Media and Public Affairs, Dr Ajibola Basiru, said the loan request was in order because it was targeted at specific projects.
He said the various external and domestic loans being taken by the Buhari regime would not be a burden to the nation, contrary to fears expressed by some economists.

The Senate spokesperson also justified the huge sums proposed by the regime in the 2020 budget to service loans.
He said, “Debt servicing is a cost of the funds you have raised. For the economists, it is a question of whether the cost of funds is justified by the value you get for what you are raising
“The truth is that, globally today, debt is a major source of public finance funding. Debt is not a burden.

“It only becomes a burden when you take funds and irresponsibly spend the money on what will not bring development to the country.
“If you borrow and do infrastructural development and enlarge the economy and increase the earning power, you are in order.

“The infrastructure that we will spend this $5bn to execute, if we want to wait until we raise the money, it could have increased to $15bn.
“The interest that we get today will be lower than what we will get later.”