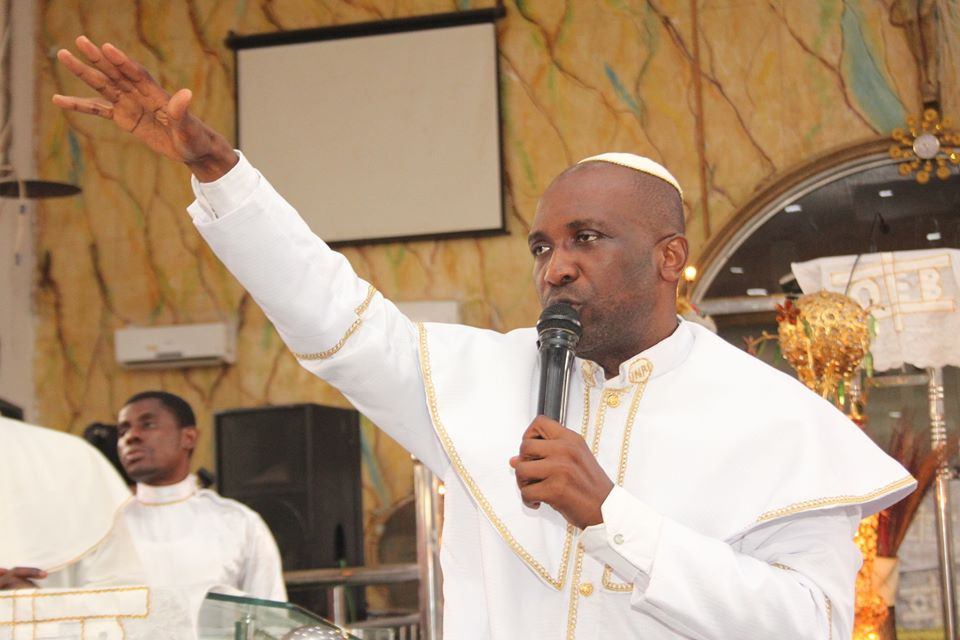 Following the death of one of APC’s prominent Law Maker, Senator Bayo Oshinowo, popularly known as Pepperito, the leader of INRI Evangelical Spiritual, Primate Elijah Ayodele, who earlier predicted three days ago that he sees prominent people dying of Covid-19, has made another strong warning.

The man of God, in his new warnings made it known that Covid-19 is still out there to wreck more havoc in the country and that the poor will also be affected, though they won’t be recognized.
He expressed sadness over the death of the APC law maker, describing it as a big loss to the country but stated that more death is still on its way if the needful isn’t done.

While talking about the needful, he explained that the only solution to weaken the strength of the virus is dedicated and continuous prayers for three days. He noted that God has chosen a Thursday, Friday and Saturday for this prayer and there must be total lockdown for the three days.
‘’ I send my condolence greetings to the family of the dead , I am not happy, it came as a rude shock to me especially for the fact that I earlier spoke about this but I still want to warn those in power, Covid-19 is still out there to kill targeted number of people.
Not all politicians will see 2023, covid-19 will still kill so many of them until the needful is done.
Its unfortunate that it has killed another prominent Nigerian, the solution is that there should be lockdown for three days, in these three days, there will be tensed prayers for the sake of cleansing. The government needs to meet with some pastors, imams in order to avert this evil, we haven’t seen anything yet until prayers are done.’’
Recall that he had earlier said the virus will hit strategic places in the world which includes state houses, presidential villa, to mention a few, while releasing this warning, he still maintained that Covid-19 isn’t done in the villa yet because it’s still very much around there. He had also predicted the death of the former chief of staff to the president, Abba Kyari as a result of the deadly virus.

Furthermore, he made reference to the recent fracas that took place in the presidential villa, which involved the president’s PA and the First lady’s Aide-de-camp. According to information, the President’s PA was ordered by the ADC to embark on a compulsory 14-days isolation because he had just returned from Lagos, this was a rule made to curb the spread of the virus. This caused several issue that led to some of the parties being detained and the security personnels of the first lady being withdrawn.
The man of God made it known that Aisha Buhari is fighting for a good course and he backs her up because he sees Covid-19 death hovering around the villa and is due to strike soon.
’’The virus is still in the villa, its in several state house,. Governors needs to pray, it’s in the business world, it has a number of people to kill, the only thing to do is prayer, people grumbled the other time we said it.  it’s in the villa, another thing will happen there soon, this isn’t a doom prophecy but that is what I see.
The virus is in the villa, I support Aisha Buhari, she is fighting for a good course, people are not just seeing her angle, she should be supported. We don’t need more death in the villa but Covid-19 death is threating the villa. African presidents are not safe, some governors are still going to be infected, with the nose mask too, we are not safe, only God can save us from it. The government can’t see, this is just the tip of the iceberg.
Governments don’t understand, it will hit Donald Trump, it will hit sitting presidents. It is in the midst of the ministers, it is in the national executive council already, Prayer needs to be done to overcome this.
We need dedicated and continuous prayers for three days, even white house isn’t safe, the Britain house too, most of the African country are positive already.
Similarly, he stated that the peak of Covid-19 will be between July and August ending, he described what he sees as Alarming. He also said it will re-occur in China because it is not over yet.
‘’It will be terrible between now till August ending, the medical world can’t do anything, the solution is in the hands of God, Covid-19 has not started in Nigeria, the peak is July, August where it will be alarming.
Covid-19 will still reoccur in china, it’s not yet over, it will kill eminent people in the world. The vaccine will come out but it will take time. He said.