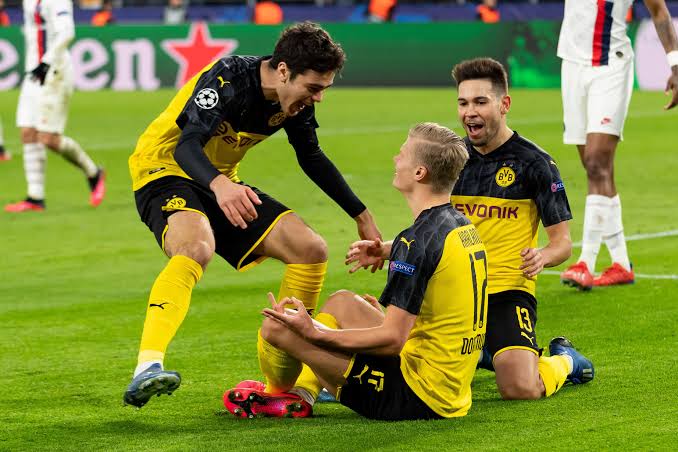 The 19-year-old striker claimed the first goal in Germany’s top flight for over two months to set Borussia Dortmund on the way to a 4-0 win over their local rivals Schalke.

Portuguese international Raphael Guerreiro then added two goals either side of a Thorgan Hazard strike as second-placed Dortmund moved to within a point of leaders Bayern Munich, who are chasing an eighth straight title and play Union Berlin away on Sunday.

Haaland steered a low Thorgan Hazard cross into the far corner on 29 minutes to claim his 10th goal in just nine Bundesliga matches.

It was his 41st goal this season in all competitions and his 13th for Dortmund in just 12 games since joining in January from Red Bull Salzburg.

He celebrated by dancing alone — making no contact with team-mates, who clapped him on — to comply with the strict hygiene guidelines which allowed the league to return.

In front of empty terraces and no more than 300 people allowed into Signal Iduna Park, which is normally packed with almost 82,000 fans, Guerreiro added Dortmund’s second goal just before half-time following an error by Schalke goalkeeper Markus Schubert.

Haaland played a role in the build-up to the third goal before Julian Brandt set up Hazard to fire home on 48 minutes.

Schalke looked short of match fitness, while Dortmund were sharper and Guerreiro grabbed his second in style after a one-two with Haaland in the 63rd minute.

Elsewhere, third-placed RB Leipzig were held to a 1-1 draw at home to Freiburg, leaving them four points off top spot.