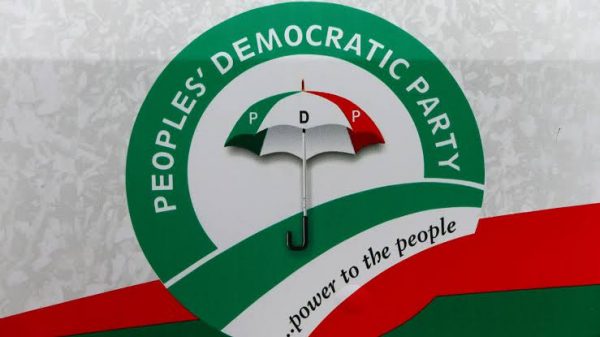 The former House of Reps members,  who insisted that there will be no
sharing of the PDP local government and State Executive Committees
with any dissident group,  added that “those who plotted political
coup should be ready to bear the consequences.”

The former National Assembly members, who included Segun Adekola,
Kehinde Agboola, Ayodele Oladimeji and Thadeus Aina, said; “We are all
major stakeholders in our federal constituencies. We were members of
the House of Representatives and some of us were candidates in the
rigged elections on 2019. Therefore, no one,  including Olujimi can
claim control over our own federal constituencies.

They said; “Olujimi must perish the idea that she represents everybody
and stop being an ingrate to our benefactor, while she goes about
hobnobbing with the All Progressives Congress (APC) in Ekiti State.

“We condemn her actions in entirety and we wish to state that whoever
that is thinking about bringing our leader and benefactor,  former
Governor Ayodele Fayose to the negotiating table with Olujimi should
perish that idea.

“Fayose remains our leader and it is a known fact that it was through
him that we, including Olujimi climbed the political ladder to the
level that we are today.  If she feels  that after using the ladder of
Fayose to climb to where she is, what she must do is to destroy the
ladder, we are not part of her rebellion and this is being placed on
record.”

On the outstanding Congresses of the PDP in Ekiti State,  the former
NASS members said; “In Ekiti PDP,  there is no tradition of sharing
party positions and it won’t start now.

“Even in 2012 when contest for the State chairmanship was so close
that it ended with 318 votes for the winner as against 310 by the
other group, the group that won the chairmanship went on to take all
the State exco positions. Two years after,  PDP returned to power with
landslide victory in the governorship election.

“Therefore,  Olujimi begging around for sharing of positions will not
work. She should rather retrace her steps, show remorse and apologise
for her rebbelion.”

They urged the party’s National Working Committee to conduct the
outstanding local government and state congresses without further
delay, saying even if it is tomorrow or next year that the party
chooses to conduct the remaining congresses,  we are ready.”