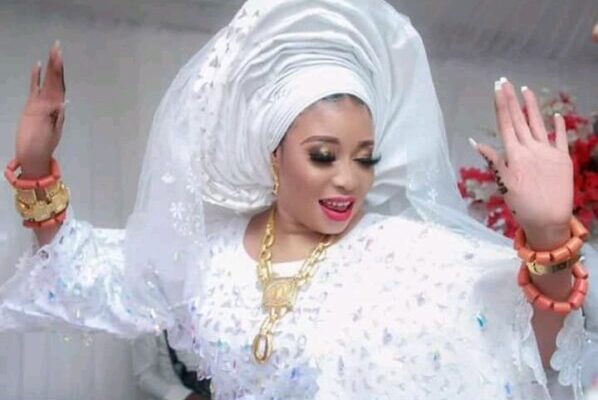 Nollywood star actress, Liz Anjorin, has officially married. Liz, on Thursday 16th of July 2020, hinted on her Instagram handle of her readiness to hook in holy matrimony a man it turned out she had kept away from the public eye for years since they met.

The next day, photos of her quiet wedding engagement to the lucky dude surfaced online and made headlines.

In a statement she posted to back up the photos celebrating her wedding, jubilant Liz Anjorin praised the hitherto mystery lover for his loyalty to their collective covenant never to make the 14 year old affair a public topic until it was time to do so.

Meanwhile, Global Excellence can authoritatively reveal a secret many might not know about the beautiful actress’ marriage. Although, Liz has never been married, she is now in the league of single celebrity ladies that are attracted to married men.

According to an insider, if the major reason attached to romantic affairs between single lady and married man is financial benefit, then Liz wouldn’t have been in relationship with the groom who is identified as Lawal Lateef Gboyega a.k.a. Sologo. The reason is that Lateef was not known to be a star figure neither does he run any big business that could earn him the affection of such an averagely well-off lady like Liz.

The source told Global Excellence that Lateef, a scrap metals dealer whose workshop is based in Ikorodu, Lagos State, is already married to four wives who live under his roof namely Kemi, Jumoke, Fola and Kenny, with eight children. Liz Anjorin would be 5th wife! The source added that although, Lateef lives an expensive lifestyle, his economic standing is actually below the average. His playboy lifestyle, the source posits, probably drew Liz’s attention to him in the beginning.

The actress herself referenced Lateef’s past charity gestures to her family in her wedding post.

She wrote; “saying yes is like paying back 1% of your 1001 good deeds to me and my late mother. My father, my brother, my comforter, my gist partner, my paddy, my husband, none of the good deeds you gave me spread to third party or internet till tomorrow…”

However, if what the star actress desires in marrying other women’s husband is true relationship benefits like attention and emotional understanding, the source said, she would need to consult her four predecessors who not only feed their children and pay their school fees but also pay their own rents allegedly without input from their husband.

The source informed Global Excellence that there have always been complaints of tension, quarrels and neglect in Lateef’s polygamous marriage while he dated Liz secretly. Despite that the wives alone care for their eight children namely Ayomide, Hamdalat, Hammed, Abdulrahmon, Wuraola and Latifat, with the new babies delivered by Fola and Kenny in the middle of the Covid-19 pandemic break, the source hinted that they also silently bear scars of physical and emotional tortures.

According to the source, two of the women have been sent packing by their landlords when they could not meet up with their house rents. “Lateef would feel provoked and beat any of them who dared ask for rent support. He would ask them to find a way to pay their house rents. Two of his wives were given quit notices recently by their landlords when they couldn’t pay their rents. Lateef stays in a room self-contain apartment in Ikorodu yet he lives big on credit,” alleged the source who warned that there are things more essential in the type of Liz’s new life than just love.