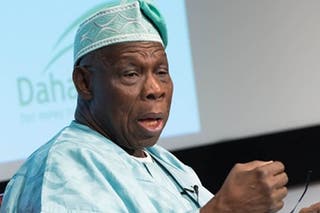 The Presidency on Sunday berated former President Olusegun Obasanjo over his Thursday’s comment on the state of the nation, describing him as the country’s ‘divider-in-chief.’

The Senior Special Assistant to the President on Media and Publicity, Garba Shehu, said this in a statement titled “Obasanjo is Nigeria’s divider-in-chief.”

But socio-political groups in the country differed on the Presidency’s attack on Obasanjo.

While the pan-northern socio-political group, the Arewa Consultative Forum, advised Obasanjo to stop presenting himself as a saint, the Ohanaeze Ndigbo said the former President’s administration was more credible than the regime of the President, Major General Muhammadu Buhari (retd.).

On its part, the pan-Yoruba socio-political group, Afenifere, said Obasanjo was more pan-Nigerian than Buhari, whom it accused of dividing Nigeria along religious and ethnic lines.

Obasanjo had on Thursday said Nigeria was slowly becoming a failed state and a basket case that urgently needed to be pulled from the brink of collapse.

Speaking while delivering a speech titled, “Moving Nigeria away from tipping over” at a consultative dialogue in Abuja, the former President said he had never seen Nigeria so divided, adding that many of the problems plaguing the country were due to the recent mismanagement of Nigeria’s diversity.

But Shehu said with his comment which he described as unfair attacks on the President and his regime, Obasanjo had descended from the lofty heights of a commander-chief.

He stated, “In his most recent statement, former President Olusegun Obasanjo attempts to divide the nation while President Muhammadu Buhari continues to promote nation building and the unity of Nigeria.

“The difference is clear. From the lofty heights of Commander-in-Chief, General Obasanjo has descended to the lowly level of divider-in-chief (to adapt the coinage of Time).”

The presidential aide said as some commentators were already suggesting, Obasanjo should, in accordance with his mantra as a statesman, get involved with problem-solving instead of helping the “mushrooming of a poisonous atmosphere of ethnic and religious nationalism.”

He said the former President must have disappointed many of his local and foreign admirers by showering commendations on a few extremist groups which had vowed to shun the invitation to the National Assembly to participate in the process of constitutional amendment.

Shehu added that Obasanjo must have left his admirers confused in announcing the support for the boycott of a democratic process of changing the constitution, at the same time calling for dialogue and engagement.

The statement added, “The fact that the process he ushered in under his administration with the dubious intention of amendments that sought tenure elongation failed–as did two other attempts by the successor administrations of the same political party– does not in any way justify his dismissal of the exercise by the 9th Assembly as another waste of time and resources.

“To the credit of the All Progressives Congress-led 8th Assembly, the process of constitution amendment was carried through, paving the way for, among other benefits, the financial independence of local government councils, state Houses of Assembly and the country’s judiciary. These changes have already been signed into law by the President as mandated by the constitution.

“The recent decisions by the administration as they relate to subsidy withdrawal, helping to plug some of the most horrendous notorious holes and release of scarce resources for the more pressing needs of the people have also not escaped the ire of the former President.

“It’s a known fact that the withdrawal of subsidies had been on the wish list of the Obasanjo-led Peoples Democratic Party. They failed in achieving these measures because, one there was a shared greed. They plundered the treasury as much as anyone could in the name of either subsidy or waiver with reckless impunity.

“Two, is to say it takes courage and rare statesmanship on the part of a leader to do as President Buhari to shun populism and seek the best interest of the people and the state, providing the kind of reform and development that Nigeria urgently needs.”

Shehu boasted that Buhari had run a regime focused on infrastructural development.

He said with his achievements and the more to come, it was not surprising that Buhari would be an object of envy from politicians who he said failed to deliver.

He added, “It (Buhari’s) is a pro-business administration that has used diplomacy to unlock bilateral trade and investments.

“He leads a government that has liberalised the investment climate and market access by achieving reforms that have placed the country in the list of the world’s top reforming economies.

“Nigeria, which other nations had mocked and ridiculed for so many things that were wrong is today progressing at a pace reflecting its size and potential.

“With so much to show and many more coming, it is little surprise that President Buhari would be the object of envy and harsh unfair challenges by politicians who failed to deliver, but continue to nurse ambitions of delighting the audience long after their curtain has been drawn.”

Shehu also faulted the views of some analysts on Buhari’s recent advice to West African leaders to avoid tenure elongation.

He said contrary to the assertions by the few analysts, Buhari’s recent speech in which he advised West African Presidents against tenure elongation beyond constitutional limits had been consistent with his long-held views on the need to adhere to the rule of law.

Also, the Minister of Information, Alhaji Lai Mohammed, in a statement on Sunday by his Special Assistant on Media, Segun Adeyemi, faulted Obasanjo.

The minister said the country would have been overrun by Boko Haram insurgents and bandits if the President had not rallied for regional and international support.

He said Buhari came into office at a time that “a swathe of the country’s territory” was under occupation by terrorists and “many Nigerian towns and cities, including the capital city of Abuja, were playgrounds for insurgents.”

He said it was a moment that “the nation’s wealth had been looted dry, with little or nothing to show for the nation’s huge earnings, especially in the area of infrastructure.”

The minister therefore described as “a cruel irony that those who frittered away a great opportunity to put Nigeria on a sound socio-economic footing, at a time of financial buoyancy, and those who planted the seed of the insecurity in some parts of the country today, are the same ones pointing an accusing finger at a reformist government.

“Nigeria today faces a lot of challenges. But whatever situation the country has found itself in, things would have been much worse but for the deft management of resources, unprecedented fight against corruption, determined battle against insurgency and banditry as well as the abiding courage of Mr. President in piloting the ship of state.

“Nigeria today is not a failed state, but a nation that is courageously tackling its challenges and building a solid infrastructure that will serve as the basis for socio-economic development.”

Divider-in-chief: Presidency must be referring to Buhari, says Afenifere

But the spokesman of Afenifere, Yinka Odumakin, in an interview with The PUNCH, said Shehu must be referring to Buhari when he called Obasanjo a divider-in-chief

Odumakin stated, “They must be referencing their boss. You can say anything about Obasanjo but you can’t accuse him of dividing Nigerians the way this government has been setting herdsmen against farmers, north against south or Muslims against Christians.”

On its part, the apex Igbo socio-cultural organisation, Ohanaeze Ndigbo, said Buhari’s regime does not have ears to hear the voice of wisdom.

The National Publicity Secretary of Ohanaeze, Prince Uche Achi-Okpaga, in an interview with The PUNCH, said Obasanjo as a former head of state and ex-President knows where shoes pinch.

While condemning the Presidency’s attack on Nigerians whenever they voiced their concerns about the survival of this country, he asked, “What has this government offered Nigerians? This government is a government that took over in 2015 with deception.”

Everything about Buhari is pro-North – Ohanaeze

On the divider-in-chief, he said, “The administration of Obasanjo and the present one are incomparable.

“There was security in Nigeria during Obasanjo’s administration but this government condones insecurity. His (Buhari) kinsmen are encouraged to terrorise the rest of Nigerians why unarmed Nigerians are hounded by security agents.

“Was it not Obasanjo that brought technocrats irrespective of where they came from? Is Ngozi Okonjo-Iweala from Yorubaland? She is Igbo. He brought Mrs Oby Ezekwesili. He brought Professor Chukwuma Soludo. These are Igbo. He knew that they could deliver and he went for them. Was it not Okonjo-Iweala that got debt relief for Nigeria? Was it not Ezekwesili that introduced due process? During Soludo (time at the CBN) you could put your money in the bank and go home to sleep, before then it wasn’t so.

“Look at Buhari’s ministerial appointments, the choice positions were allotted to his kinsmen. Military and para-military agencies are headed by the North. Everything in Buhari’s regime government is pro-North.”

Also, the PDP National Chairman, Uche Secondus, hailed Obasanjo and some Nigerian elders for standing up to save the country at its worst time in history.

Secondus, in a statement signed by his Media Adviser, Ike Abonyi, quoted the PDP national chairman as saying “The situation in the country calls for patriotic men and women to stand up to be counted.”

He also berated the Presidency and others playing to the gallery instead of embracing words of wisdom from patriotic elders chose to attack “what is real and overwhelming to all.”

The National Publicity Secretary of the ACF, Emmanuel Yawe told The PUNCH that it was high time the former President accorded respect to those who succeeded him in office.

The group listed Obsanjo’s sins to include the invasion of Odi and Zaki Biam communities as well as his purported third term attempt at the presidency.

The ACF’s spokesman said, “Obasanjo enjoys going about, presenting himself as a saint, but he is not the saint he pretends to be. His actions and utterances are motivated by self-interest masquerading as national interest.”

Also, the APC said neither the PDP nor Obasanjo and even former Vice President Atiku Abubakar could point a way forward for Nigerian because they failed to do so when they had the chance.

The APC asked Obasanjo to tell Nigerians why they had yet to get steady power supply despite claims by his administration that it spent $16bn on the power sector.

On his part, the ACF Chairman, Audu Ogbeh, in an interview with one of our correspondents called for caution. He said there was an unwritten code of conduct expected of people who had had the privilege of occupying the highest office in the country.

He said “My worry about Obasanjo is his mischief. You don’t denigrate the office of the President or the occupant of that office.”