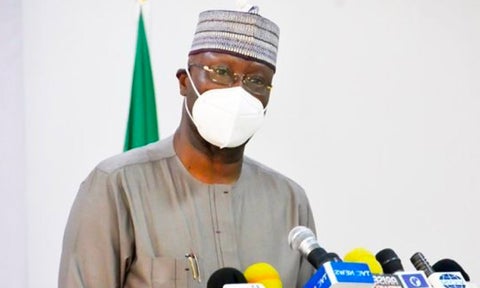 As state governments  reopen  worship centres this weekend, the Federal Government  has  threatened to review the relaxation of the restriction placed on  churches and mosques, if worshippers  disregard its guidelines.

The Chairman of the Presidential Task Force on COVID-19 and Secretary to the Government of the Federation, Boss Mustapha, said this on Thursday at the task force press conference in Abuja.

He also lamented that some Nigerians, who tested positive for the virus,  refused to go into isolation.

In the guidelines, the task force advises vulnerable people including those with conditions such as diabetes, cardiovascular diseases, cancer as well as people that are above 55 years to worship at home.

On Thursday, Mustapha said the task force would continue to explain the guidelines it issued to worship centres and other public places.

On the reopening of churches and mosques, he stated, “As we approach the weekend, we remind the public to be aware of the guidelines set for restricted opening of places of worship. National guidelines have been shared with the states and we expect that protocols will be agreed with religious leaders. Compliance is important so as to avoid unwanted consequences that put the lives of people at risk of contracting COVID-19. We urge utmost caution at all times.

“The PTF will continue to monitor the overall compliance to the easing of restriction as well as evolution of the outbreak. However, we will not hesitate to review as we progress, should the situation warrant, to avoid preventable risks of transmission.”

Mustapha restated that the World Health Organization had resumed the clinical trial of hydroxychloroquine, which it suspended on May 25.

Calling for the cooperation of all Nigerians, the SGF stated, “We have received reports about citizens refusing to help with contact tracing as well as going into isolation after testing positive. It is in the interest of everybody that contacts are traced so as to slow down the spread.

On his part, the Minister of Health, Dr Osagie Ehanire, said the Federal Government was disturbed by COVID-19 patients, who were fleeing isolation centres. This, he said, had worsened the transmission of the virus in communities.

The health minister said government had problems in trying to convince some COVID-19 positive people that they had the virus.

The health minister explained that the Federal Ministry of Health team sent to investigate the incidents in Kano, Sokoto, Jigawa, Borno, Katsina and Gombe  had concluded its work and would submit its final report on Friday (today).

The  Nigeria Centre for Disease Control, at the press conference, issued a new set of guidelines for the discharge of COVID-19 patients in treatment centres.

The Director General of the NCDC, Dr Chikwe Ihekweazu, stated that COVID-19 patients would no longer require a negative test result before  being  discharged.

The discharge criterion by the NCDC, which had included two consecutive negative tests, was reviewed last month to one negative test.

Ihekweazu, however, explained that, with new knowledge on the duration of the virus, it had become unnecessary to keep COVID-19 patients in treatment centres until they tested negative.

He said, “The two critical groups of patients are symptomatic and asymptomatic. For symptomatic patients, they may now be discharged at least 10 days after symptom onset and at least three days without symptom.

“So, if you’re symptomatic, you can be discharged if you’ve had three days without symptoms in addition to at least 10 days of symptoms. If your symptoms stay longer, we will wait for longer while managing you supportively.

“If you’re asymptomatic, you can be discharged 14 days after your first positive test, with confidence that you can go home and you’re no longer infective and you’re not putting anyone else at risk. So, we no longer have to wait for a negative test to discharge.”

The NCDC DG stated that medical professionals were ignoring the new guidelines due to their attachment to the previous protocols, adding that the science showed that 10 days without symptoms was sufficient to discharge patients.

On post-discharge management, he noted that only asymptomatic patients would be discharged.

Ihekweazu said, “We are not suggesting that people are discharged while they are still symptomatic, so we are talking about discharging people that are asymptomatic and have recovered.”

According to Ihekweazu, the reviewed guidelines are in line with the findings of the World Health Organisation, based on a new research.

Another policy change brought on by the latest research on COVID-19 case management, according to Ihekweazu, is the decision to stop the administration of antiviral drugs.

He said, “In addition, we have also removed the use of antivirals from our treatment guidelines. Like the minister just said, the trials for chloroquine and hydroxychloroquine will still go on.”

Speaking further on antiviral drugs removed from the COVID-19 treatment guidelines, Ihekweazu said, “We reached out to some antiviral drugs. One that was in our guidelines recently was the lopinavir/ritonavir combination, which is a combination of medicines we use for HIV. So, we look for whatever we have to try.

“As evidence emerges and science improves, then we have to start making hard choices. There have been quite a number of studies now that have shown that they don’t really improve the outcome of this illness, so we’ve withdrawn them from the guidelines of management.”

The National Coordinator, PTF, Dr Sani Aliyu,  raised the alarm over the lack of access to care for chronic medical conditions, including human immunodeficiency virus, as well as absence of maternal, newborn and child health services.

According to him, persons with underlying medical conditions are  unable to receive the needed care