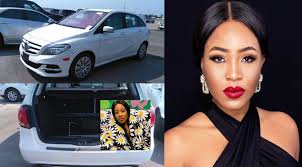 Touchaheart reports that fans of Ex-BBNaija housemate, Erica have come together to support their favourite housemate who was disqualified from the Big Brother house during the live eviction show on Sunday, 6th September, 2020.

Fortunately, a concerned fan, Ehizode Irefo, had taken it upon himself to start up a fundraising campaign on a popular fundraising platform, GoFundMe. The page which was opened after Erica’s disqualification yesterday has surprisingly raised the sum of $9,436 and counting in less than 2 hours after the launch of the GoFundMe Campaign for the evicted housemate.

Erica’s fans known as Elites and supporters have and are doing well to see to it that Erica’s GoFundMe Campaign target of $100,00 is accomplished A.S.A.P as the campaign fund seems to grow by the second.

The said money is to be used to support the disqualified housemate, Erica’s dream.

Another die-hard fan and also a car dealer at Chidi Mike Cars gifted the disqualified housemate a brand new Mercedes Benz and the sum of #2million.

Erica is currently a trending topic on Nigerian Twitter, with over 1.03 million tweets buzzing about her disqualification. Prior to the disqualification, Erica always made it on to the trends list; being most-tweeted-about housemate by fans and haters alike.

Many have even likened Erica to Tacha, who shared the same fate last BBNaija season. There is a conspiracy theory going around that the show organizers are kicking away strong contenders through dubious means; though there is no definitive proof of this.

Despite her unfortunate exit, a car, ₦2 million, $100,000 from the Erica’s GoFundMe Campaign, and fans that go hard should be enough to cheer Erica up.

BREAKING: Lagos State Govt Has Ordered The Closure Of Dowen College In Lekki Over The Death Of …..

But The Unending Agony Of Motorists On Lagos-Ibadan Expressway Now Threatened To…..

Ejimakor Said That The Court Stated, “That Mazi Kanu Be Given Maximum Comfort