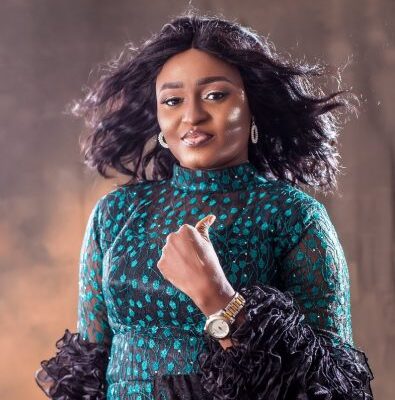 A multiple award winning gospel musician and actress, Shade Oshoba has revealed in her newly released album titled, ‘Product of Grace’ how grace helped her through the challenges of life.

“If you take a look at today, I am not looking what I went through. Guess what? Grace found me and Christ bought me with a price so I can say “I’m a product of Grace,” said Oshoba.

According to the gospel singer, ‘Product of Grace’ produced by Hykey Music in Lagos, was inspired by the Holy Spirit after her reflection on life experiences growing up and how grace found her and uniquely distinguished her in all life accomplishments.

Speaking on her collections, Oshoba said she already has two audio album and two video album to her credit, and her debut album ‘Awesome Praise’ is still striving in the gospel music industry.

According to Oshoba, her previous albums are signed under Merryheart Music, a subsidiary of Smile Media Development Concept Plc.

Oshoba, a worship leader and co-founder of Celebrity Band said “Roman 3: 23- 24 says for all have sinned and have fall short of the glory of God. Being justified freely by his grace through the redemption that is in Christ Jesus.

“We are all bought with a price and that is made manifest through grace. It can only be grace that saw me through all my challenges in life when I lost my father as a teenager.

“Miraculously, God came to my rescue as a father to the fatherless and took care of me and from that time till now it has been awesome experience of stages of grace to greater grace,” said Oshoba.

Oshoba, who started her career in 1998, noted that she has been privileged to perform on stage alone side top Nigerian artistes like Nathaniel Bassey, Mike Abdul, Tope Alabi and Frank Edwards and others..