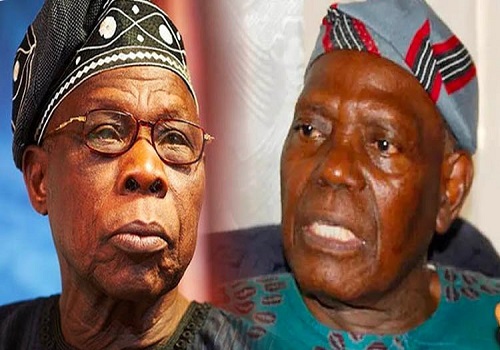 *’Ex-president did everything to bring my government down’

A former Osun State Governor and first National Chairman of the All Progressives Congress (APC) Chief Bisi Akande has said he has never seen anything genuine in ex-President Olusegun Obasanjo.

Akande, in his book, ‘My Participations’, narrated several instances of Obasanjo’s alleged attempts to bring him down.

He added that even after he had been rigged out in 2003, Obasanjo did not relent in his effort to bring him closer to himself for the purpose of rubbishing him.

Akande said during the centenary celebration of the Baptist Church in Abeokuta, Obasanjo announced that he was “an example of a prudent and honest governor”.

“He said I was the most credible. That didn’t make me to have a change of opinion about Obasanjo.

“I have never seen anything genuine about him despite his self-glorification,” Akande wrote.

Globaltimes Nigeria reports that He claimed the ex-president’s nationalism and patriotism were fake, adding that his ambition to be the centre of Nigeria’s universe made him express constant hatred for the late Obafemi Awolowo.

“It was this vaunting ambition that made him express constant hatred to the most altruistic and selfless leader of our time, Chief Obafemi Awolowo.

“He continues to wonder till tomorrow why the Yoruba people, especially after his tour of duty as a two-time President, continue to elevate Awolowo to the highest pedestal while they have no respect for him. So, he would wonder to his grave!

“In his detestations for Awolowo, he is ruled by a virulent inferiority complex, believing that he needed to do everything to supplant the greatness of Awolowo or undermine his legacies.

“That was why he launched the Universal Basic Education in 1978, knowing that free education would be the core of Awolowo programme for the Second Republic.

“That was also why he continued in this line during his two-term disastrous presidency.

“For the reason that I was not dancing to his tune, Obasanjo did everything to depress and discredit my government and undermine us in Osun state.

“Indeed, he wanted my government to collapse and once I had problem with Omisore, he adopted him as a willing tool and railroaded him into the Senate despite his detention for the assassination of Bola Ige,” he wrote.

He accused Obasanjo of ordering that Osun State should be short-paid by N216 million monthly from the Federal Allocation.

“At the beginning, we were earning about N150 million when our salary bill was about N260 million.

“Suddenly, the price of crude oil was rising and the Petroleum Trust Fund (PTF) was back in the account.

“So instead, of our own income to move from N150 to N300 million, we were experiencing reduction.

“Suddenly also, they decided deducting N216 million from our allocation.

“We went to the Budget Office in Abuja to find out why they were making the deductions and we were told it was ‘order from above,’ meaning they were acting on a directive from the Presidency.

“My finance commissioner, in frustration, advised that perhaps we should bribe them. I said “No”.

“I wanted to know what the cause of this order from above was but we didn’t find out anything. They did this for a few other states too.

“They claimed they were deducting for some inexplicable international debts.

“But I came to know the sinister motive when Oyinlola became governor and they paid the arrears of the deductions to his government,” Akande added in the autobiography.