INSECURITY IN BUHARI’S 365 DAYS: We only have isolated cases of banditry, kidnapping — Lai Mohammed 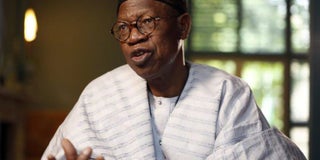 Fight against insecurity, revamping the economy and fighting corruption are the three areas the administration promised to make the difference. Let’s talk about the report card in the last one year…

Late last year, the Federal Government took bold the decision on border drill, which many people call border closure. The decision was taken, primarily, not only for economic consideration but also for security consideration. It was a joint effort between the various border authorities, customs, immigration, the armed forces and police, but coordinated by the Office of the National Security Adviser.

One of the major takeaways from the border closure is that it drastically reduced proliferation of small arms into the country. That has also impacted on armed robbery, banditry and kidnapping because, before then, our porous borders were veritable avenues for proliferation of small arms and drug trafficking. Today, there are fewer drugs on the streets now and less illegal arms as a result of that. That is why generally there has been a reduction in crime. Border drill also led to more revenue coming to customs. They used to make about N4. 5b daily, after the border drill, it moved to between N5 and 8billion daily, unfortunately until the last three months because of the Covid-19 pandemic. The border drill, in terms of security, encouraged inter-agency cooperation.

We have the new visa policy which was also launched in February and which is a bold policy and, today, we have 79 categories of visa, but the one that interests most is the one for ECOWAS, the one for Africans, one for business men, and it has been so simplified such that, with the new visa policy, any member of ECOWAS does not need a visa to enter any ECOWAS country. All you need is your valid passport. Frequent travellers have a category also. The beauty of this visa relaxation is that it will encourage more investment in the country, make tourism easier and lead to better integration among Africans.

In the last couple of weeks, our armed forces have taken the battle to insurgents. The combination of air power, the new morale of the army and the new platforms acquired by the air force, in particular, has resulted in not just in the routing of Boko Haram insurgents but also the surrender of many of their commanders. Clearly the last couple of months have witnessed some successes in our battle against insurgents.

Then of course bandits and kidnappers are being checkmated. They might not be completely eradicated, but compared with what it was this time last year to what it is today, you are going to have some isolated cases of banditry and kidnapping. I can say that the combination of better platforms and better morale for the military has resulted in the containment of insecurity in the North-East and other parts of the country.

In the area of infrastructure, government remains focused and convinced that you cannot achieve economic development without investing in infrastructure. Government took one of the boldest moves to improve the power situation and banish power cut when, in 2019, it signed agreement with Siemens of Germany, a power giant, to give us constant power in the first instance by the end of 2021, deliver and ramp up our power supply to 7,000mw by 2023 ramp up to 11,000mw and thereafter ramp it up to 25,000mw after it would have addressed the challenges of transmission and distribution.

As of today, we generate 13,000mw but what gets to our households and factories is about 3,500mw due to obsolete infrastructure. With the agreement signed with Siemens and cooperation of Gencos and transmission companies, we are confident that by the end of next year, power will reach our homes on the constant and regular basis after it must have been increased to 7,000mw, more than double of what we are enjoying now.

0 comments on “INSECURITY IN BUHARI’S 365 DAYS: We only have isolated cases of banditry, kidnapping — Lai Mohammed”