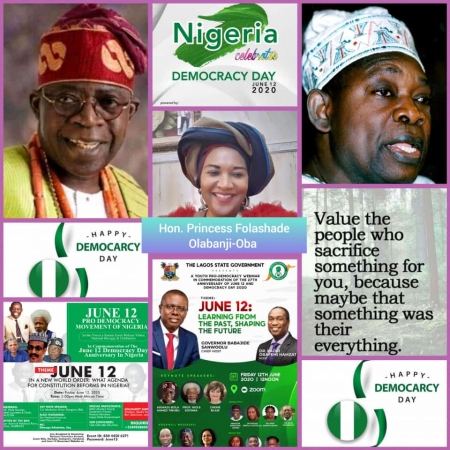 As we Recall that President Muhammadu Buhari had declared June 12 as the new democracy day in Nigeria after shifting it from May 29,to June 12th  which had  been the date for years.

Princess Folashade  explained that MKO Abiola’s legacy, despite the fact that he is no more still remains intact and has served as something to rely on by past and present governments.

According to her, MKO Abiola fought for democracy with his life, he gave it all it requires, and till date, the presidential election which he participated in is still regarded as the best because it was totally free and fair.

Also, she thanked President Muhammadu Buhari for immortalizing the great philanthropist by declaring June 12 as the democracy day, and by declaring his election as President of Nigeria valid.

Furthermore, she hailed the national leader of the All Progressive Congress, Asiwaju Bola Ahmed Tinubu for his impact in ensuring MKO Abiola’s memory is kept by naming June 12 as the new democracy day and declaring him as winner of the 1992 presidential election that was earlier annulled.

‘’June 12, is a significant day in Nigeria, whenever June 12 is mentioned, what comes to mind is one of our heroes of democracy, MKO Abiola.

MKO Abiola, during his lifetime was a philanthropist, one who helped anyone who came his way, one who was significant in his doings and one who wanted a better administration for Nigeria.

Unfortunately, he wasn’t given the opportunity to govern the country, yet, his impact was felt, and is  still being felt .

Nigeria lost a gem when he died, but what he stands for still remains Intact, his memory still lingers around and his legacy is what so many governments build on till date.

Our national leader, Asiwaju Bola Ahmed Tinubu’s impact in immortalizing him will never be forgotten. He literally took it upon himself to relentlessly fight for what MKO Abiola deserves and to God be the glory, it was joyfully approved.

Lots of people are benefactors of his passion, sacrifice,  astute political wisdom, knowledge and great belief in this great country.

To the family of the late MKO Abiola too, Asiwaju has been doing a lot underground to ensure the family stays relevant, are being taken care of, even when it is difficult.

Also, President Muhammadu Buhari has done a lot to immortalize him. In 2018, he declared June 12 as democracy day and also declared the annulled election that would have made MKO Abiola President to be valid, making him a former President of Nigeria.

No doubt, it is not out of place to note that President Muhammadu Buhari, is another leader who cherish democracy, going by the things he has done for the country.

I wish Nigerians a great celebration of democracy.