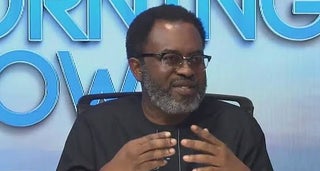 The Lagos State Government has approached the Supreme Court, praying that virtual court hearings, necessitated by the coronavirus pandemic, should be validated

The state’s Attorney General and Commission for Justice, Mr Moyosore Onigbanjo (SAN), is, in the suit, urging the Supreme Court to hold that virtual court hearings are constitutional and do not offend Section 36 of the Constitution.

Joined as defendants in the suit are the Attorney General of the Federation and the National Assembly.

The Lagos AG wants the Supreme Court to hold that it was not necessary to amend the constitution, particularly Section 36, to make virtual court hearings valid and constitutional.

He is urging the apex court to stop the Attorney General of the Federation and the National Assembly from taking steps to amend Section 36 of the Constitution, so as not to render a nullity all the virtual court proceedings already conducted in Lagos via Zoom, WhatsApp or any other audiovisual or video-conference platform.

The Lagos AG wants the Supreme Court to declare that “the extant provisions in the Constitution, especially sections 36 (3) and (4) are adequate to accommodate virtual or remote hearings of any kind whether by way of Zoom, Microsoft Teams, WhatsApp, Skype, or any other audiovisual or video-conference platform as provided for in the Practice Directions issued by the Chief Judge of Lagos State dated 4th and 15th May, 2020.”

Onigbanjo noted that the Chief Judge of Lagos State, Justice Kazeem Alogba, had exercised his powers, pursuant to Section 274 of the Constitution, to issue a Practice Direction to back virtual court proceedings amid the pandemic.