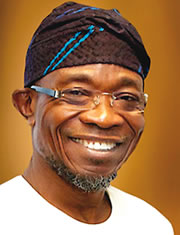 LGAs Desire Aregbesola To Be Imprisoned After A Dispute Over….

Globaltimes Nigeria reports that The Federal High Court in Lagos has granted an ex parte application authorising commencement of committal proceedings against the Minister of Interior, Rauf Aregbesola.

The plaintiffs, through their lawyer, Roger Adedimeji, are seeking an order to jail the minister for the alleged disobedience to a December 8, 2021 court judgment, restraining the Ministry of Interior from further operating the Federal Marriage Registry, Imo State and others.

The plaintiffs told the court that after the bailiff of the court sealed the Federal Marriage Registry, Imo State, as ordered by the court, officials of the Ministry of Interior went to unseal the facility and continued their operations.

Listed as defendants were the Minister of Interior, Attorney General of the Federation, Abubakar Malami, and a contractor, Anchor Dataware Solutions Limited.

In their ex parte application taken before Justice Daniel Osiagor on July 8, 2022, the plaintiffs prayed the court “for an order of committal to prison of the 1st defendant (Aregbesola), having disobeyed the order of this honourable court made on December, 8,2021, compelling him to stop contracting federal marriage registry in the marriage district (local government councils) except the Ikoyi and Abuja Federal Marriage Registry.”

After listening to the plaintiffs’ counsel, Justice Osiagor granted leave to the four local government councils to commence committal proceedings against Aregbesola

In this article:Aregbesola, Imprisonment, LGAs

BREAKING: Former Pensions Boss, Has Been Sentenced To 8 Years Imprisonment.

Residents Should Prepared For Shutdown Of Telecommunication Services- El-Rufa

Globaltimes Nigeria reports that The Kaduna State Governor, Nasir El-Rufai, has asked residents to prepare for a shutdown of telecommunication services as security operatives...

• Sentenced to one-year imprisonment or N1m in lieu of jail Globaltimes Nigeria reports that A Federal High Court sitting in Lagos has sentenced...