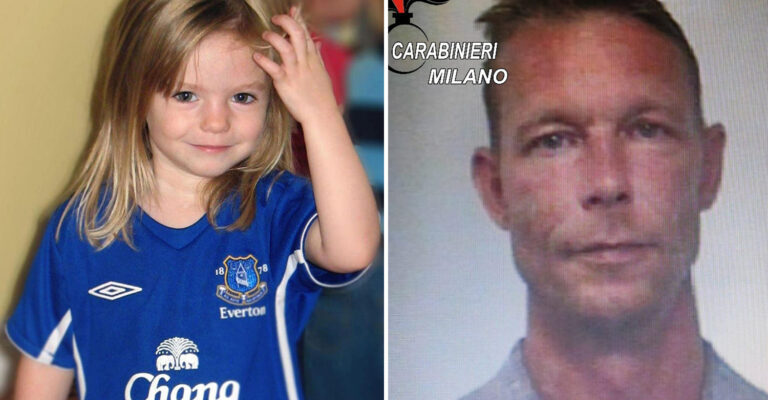 The operation has cost more than £12.5million since 2011 – but Met police chiefs have requested more funding in a bid to find vital evidence that could snare the man they believe is responsible for Madeleine’s kidnap and murder.

Madeleine disappeared in May 2007 from the holiday apartment she was staying in at Praia da Luz on Portugal’s Algarve coast with parents Kate and Gerry and her siblings.

Convicted paedophile and rapist Christian B was named by German police last year as the prime suspect for her abduction and murder.

Scotland Yard’s special grant from the Home Office is set to expire this month, but bosses hope to be given further cash to continue probing Christian B for another year.

A summit between British, German and Portuguese detectives is due to be held in Lisbon in the next two months.

Ministers are expected to allocate a further £350,000 to fund a further six months of the investigation, reports the Mirror.

Prosecutors in Germany said last June there was ”concrete evidence” that Madeleine was dead – but have not revealed anything else on the case.

Suspect Christian B was living locally to where Madeleine was reportedly snatched almost 14 years ago – just days before her fourth birthday.
Police said his mobile was in the vicinity of the Ocean Club apartments the hour before she vanished and his paedophile past makes him a prime suspect.

The lawyer representing Christian B this month admitted he has considered the possibility his client may be guilty.

Friedrich Fulscher has been representing the suspect since he was named by German authorities.

He has always insisted the convicted rapist and paedophile is innocent of any involvement but has now explained his stance in a new TV documentary on the case.

Speaking on Discovery + Prime Suspect: The Madeleine McCann Case, Mr Fulscher, also revealed how he meets his client three times a week in prison isolation as he is a convicted sex attacker.

Mr Fulscher said: “Of course it has crossed my mind, I always consider the fact that my client is guilty of a crime. Of course you think about that. The first training you learn as a defence lawyer is that you should always accept the possibility that your client is lying to you.

”That doesn’t mean that I believe that to be the case here but you always have to consider the possibility.”

Madeleine McCann suspect Christian B has been linked to ten attacks or disappearances involving children and women across Europe since the late 1990sCredit: Reuters

Kate and Gerry McCann Madeleine’s parentsCredit: PA:Press Association
But Mr Fulscher added he believed the case would never come to court as there is no hard evidence and prosecutors in Germany are simply trying to pin as many sex crimes on Christian B as they can.

He has been linked to ten attacks or disappearances involving children and women across Europe since the late 1990s but has not been charged with anything.

Even, now nine months after being identified as the prime suspect for Madeleine’s disappearance, he has not faced trial.

He said: ”All sorts of new allegations have been raised against my client, for all sorts of crimes, sex crimes. It seems that they are intent on pinning all the missing persons cases in the last 15 years on him.”

FIND LEXCIESchoolgirl, 11, missing in west London as cops launch appeal to find her
1 / 3
Mr Fulscher added: ”Doubt is the one factor which can be decisive in a criminal case. If doubts remain after the hearing of all the evidence in court as to whether the defendant is guilty, the court must acquit.

”It’s the maxim of ‘in dubbio pro reo’, when in doubt for the accused.”

Goodluck Jonathan Sympathize With Chadians Over Death Of President Deby