Olowu of Kuta tackles senate over Buratai, others 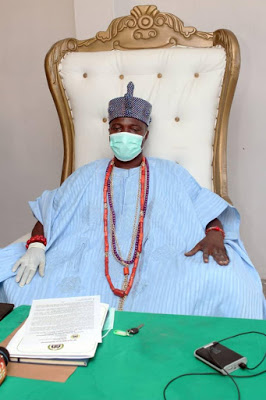 The Olowu of Kuta in Ayedire Local Government area of Osun state, Oba Adekunle Oyelude Makama has asked the Senate to be more creative in finding solutions to the problems of insecurity, insurgency and banditry in the country.

The traditional ruler, who was reacting to Senate’s Tuesday call for the resignation of the service chiefs as solution to the country’s insecurity challenges reminded the lawmakers that the problem the country faced demanded experience which he said the current military leaders have been using effectively against the insurgents.

The oba warned that the senate should stop giving the impression that once the current service chiefs leave the stage, insecurity would disappear stressing that the exit of the service chiefs in the middle of a war would be a major set back for the nation.

“Rather than continue to play politics with this issue of who should be service chiefs, the senate should rather be more actively involved in the search for peace through political means. Every war ultimately ends on a roundtable. Our senators, being representatives of the people in all the 109 senatorial districts in the country should galvanise the nation at this time to back our service chiefs with political solutions to this war going on. The solution does not lie in changing a set of service chiefs for another.

“For instance, there has been a change of the head of our police three times since 2015, what has been our experience with internal security despite the changes? This alone should tell us that the problem is not with the leadership of the military who have continued to give a very good accountof their expertise in combating terrorism and banditry.

“A war is won through a combination of consistent military engagements and formulation of clear headed political policies. I therefore, appeal to our lawmakers to let us look beyond a change of leadership in the military in our search for solutions to the nation’s security problems. Beyond the politics of it, I do not see how a replacement of the military leaders will make a difference.

“We need more of political solution now which the senate must see as its own share of the responsibility of getting peace back into our country,” the oba said.

0 comments on “Olowu of Kuta tackles senate over Buratai, others”