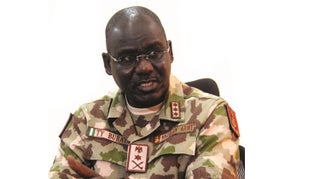 One person has been confirmed dead with five others left with various degrees of injury after a vehicle conveying some soldiers rammed into a hilux in the convoy of members of Borno State COVID-19 Committee in Maiduguri.

The COVID-19 team, comprising the state Attorney General, Kakashehu Lawan, and the Commissioner for Health, Dr Salisu Kwaya-Bura, were on the enforcement of the interstate lockdown along Maiduguri-Damaturu Road when the incident happened on Saturday.

The soldiers were said to have come down from their vehicle and assaulted the COVID-19 team.

The soldiers were said to be escorting some travellers into Maiduguri when their armoured vehicle hit the hilux conveying some members of the Borno Rapid Response Squad attached to the committee.

The hilux reportedly somersaulted, leaving the driver and five others critically injured.

The driver was later confirmed dead at the state Specialist Hospital where all the injured were rushed for treatment.

Speaking at Njimtilo, the scene of the incident, the Attorney General said the soldiers turned one of their gun trucks to his face, threatening to shoot him during the assault.