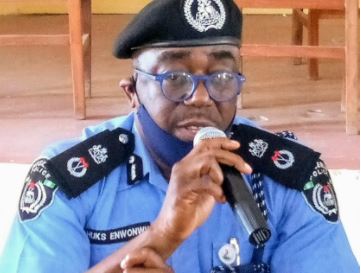 In attempt to gain first-hand knowledge of his areas of responsibility and interface with relevant stakeholders at the grassroots, the Commissioner of Police, Oyo State, CP Joe Nwachukwu Enwonwu embarked on a two-day tour across Ibarapa-Oke Ogun axis of the State.

The Police Public Relations Officer of the Command, Superintendent Fadeyi Olugbenga, who disclosed this in a statement and shared to National Association of Online Security Reporters, NAOSRE emphasized that the tour was to assess the alleged invasion of armed bandits and the incessant crisis between the herders and the farmers.

The CP equally met with key stakeholders and brainstormed extensively on the challenges, pattern and trends of crime in the area and how best to tackle them.

According to the press statement, the Oyo Police Commissioner sought for collaboration of all stakeholders with the Police to flush out criminal elements that are bent on disturbing the peace of the Ibarapa area. He equally met with Heads of farmers/herders including the Seriki Fulani/Hausa and heads of Myetti allah on the need to avoid incessant clashes as a result of destruction of farmland and retaliation of killing cattle. He directed that, the DPOs to ensure the farmers/herders enter into agreement to be drawn up by the O/C Legal, so it will be legally binding on the parties.

The Oyo Police Commissioner equally had a stakeholders meeting at Iganna Area Command with HRM Oba Soliu Oyemola Azeez, Sabigana of Iganna land in attendance with other critical stakeholders from Iwajowa LGA, Iwere-Ile, kajola LGA, Okeho, Iganna LCDA Iganna, Iwa LCDA, Ilero where he equally warned on the need for peace to reign in the area. He enjoined all to support the Police force, other security agencies. He implored them to always alert the police, whenever they see strange faces in their communities.

In continuation of the tour, on the 16th September, 2020, the Oyo Police Commissioner moved to Oke-Ogun axis. He had a meeting with the Okere of Saki HRM Oba Khalid Oyeniyi Olabisi, Oyedepo III, HRM Oba Dr. Michael Kofoworola Olakanla II, Aare of Ago-are, other stakeholders from Saki West LGA Saki, Saki East LGA Ago-amodu, Atisbo LGA Tede, Wewe LCDA, Asabari LCDA, Atisbo South LCDA Ago-are, Iseyin LGA, Itesiwaju LGA, Otu at the Saki town hall. The Okere of Saki, HRM Oba Khalid Oyeniyi Olabisi, Oyedepo III spoke on the alleged invasion of the armed bandits on power bike. He affirmed that the incident occurred outside the borders of Nigeria and it was not allowed to spill into his area. He also confirmed the efforts of the police with the Vigilantes and Hunters combing the forest in their area to ensure the forest is safe. The CP assured the communities present of the steadfastness of the police to maintain and ensure peace in Oyo State