Pa Adebanjo to Buhari: You can’t turn deaf ear to restructuring and say June 12 has been resolved 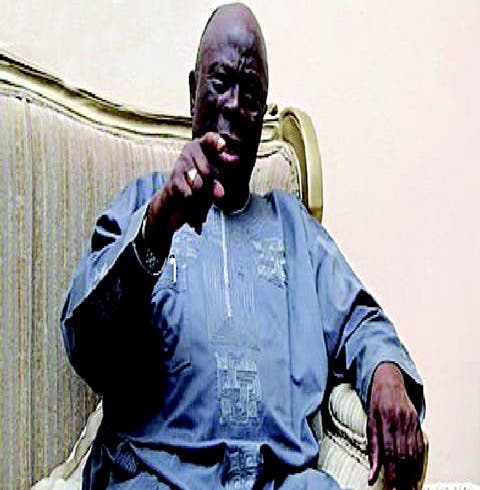 Pa Ayo Adebanjo is a leader of the notable Yoruba socio-political organisation, Afenifere. In this interview, Adebanjo says the June 12 struggle, despite the celebration of the anniversary of the declaration of the day as Democracy Day by President Muhammadu Buhari, has not been resolved. Recall that the June 12, 1993 presidential election, adjudged as the freest and fairest in Nigeria’s history and won by the late Chief MKO Abiola, was annulled by the military, thus throwing the nation into political turmoil until the return to democratic rule on May 29, 1999. Buhari replaced May 29 with June 12 as Democracy Day last year.

This is the first year June 12 is celebrated as Democracy Day. What does it mean to you?

It is only symbolic. Those ruling us have not done anything to show that we are in a democracy. We only thank God that due to the pressure mounted by the progressives, a date has been set aside as Democracy Day but, in reality, democracy has not reflected in the affairs of government. In terms of obeying court orders, abiding by the Constitution, making appointments, there is nothing to show we are in a democracy.

All things that have given cause for anxiety in the country are still there with us, the President is just there thinking nothing can happen to him. But we thank God that the pressure is still there to remind the President that whatsoever he is doing that is not in compliance with democracy will be condemned, and we will continue to condemn it.

It has not been resolved. When you talk of democracy, it must be total, we have only returned to civilian regime. Our actions and activities have not shown that we are in a democracy at all. Can you imagine people talking about restructuring without the leader of the country saying anything about it?

General Yakubu Gowon has spoken, leaders of Afenifere have spoken, Afe Babalola has spoken and all those who matter in this country have spoken about restructuring. The President just turned a deaf ear. It only means that the progressive elements should remain in the trenches because we have not got to the promise land.

Well, with the day they have set aside to honour him, the renaming of the National Stadium after him, that is okay but the way to immortalise him is to make peoples’ votes matter because he died and his mandate was not given to him. He paid the supreme sacrifice.

Do you agree that the designation of June 12 as Democracy Day was meant to get the votes of the South-West in the 2019 general elections?

I wouldn’t say no. They only did it for those who do not know what democracy means; when they didn’t fight for independence, they don’t know what it means. That may be their purpose or intention but, definitely, that is not it to those of us who know what we are fighting for.

The narrative that some Yoruba leaders betrayed Abiola is still strong out there. Do you agree?

It is the narrative of the opposition who want to neutralise the agitation. Don’t mind them.

Mention a serious Yoruba man who said that. It is only Yoruba leaders in APC and the Buhari-sponsored opposition that can say that. The non-conformists and those who never believed in it, those who are thinking they can get something from Buhari are those who will say that. No Yoruba patriot will talk like that.

Do you think the clamour for Abiola to be declared posthumous President is still necessary?

It will only be symbolic if that is done but the right thing to be done is for us to have a democratic election where the people’s votes matter. That is the way it should be done, any other thing is just playing to the gallery.

The reality of the thing is the demonstration of democracy, for the people to go to the polls and their votes count. That is the way to go.

0 comments on “Pa Adebanjo to Buhari: You can’t turn deaf ear to restructuring and say June 12 has been resolved”