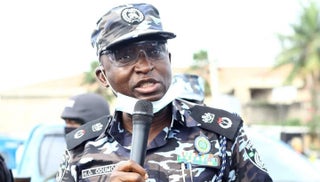 A 12-year-old girl, Blessing (not real name), is said to be experiencing trauma after she was allegedly gang-raped by four masked men at her residence in Abijo area of Ajah, Lagos State.

She was said to have been raped while playing alone in the compound around 2pm on Thursday.

Saturday PUNCH learnt that the victim, a secondary school pupil, was left bleeding from injuries she sustained in her private parts.

When our correspondent reached out to her mother on Friday morning, the victim was said to be asleep after receiving medical treatment.

The mother, identified simply as Anthonia, explained that she was not in the house when the perpetrators raped her daughter.

“I went to the office and was called (on the phone) and told that my daughter was raped in our house. I learnt she was having her online class when suddenly, there was a power outage. My husband rushed out to get fuel at a filling station so that she could participate in the class seamlessly,” the mother recalled amid futile attempts to control her emotions.

She stated, “Blessing told us that while she was in the compound, four masked men jumped into the house through the fence. They took her inside and took turns to have sex with her, leaving her with multiple injuries.”