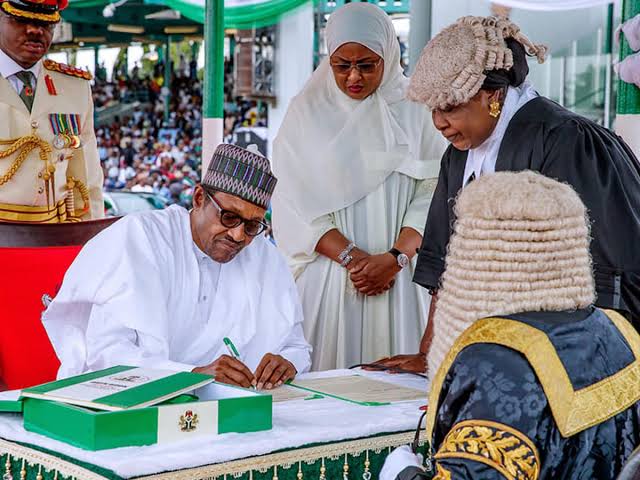 · EFCC recovered 794 billion Naira between 2015 and 2019, in addition to hundreds of properties and other assets.

.ICPC scrutiny of practices, systems and procedures of MDAs’ personnel cost from 2017 to 2019, yielded more than 41 billion Naira in recoveries from inflated personnel budgets

.In 2019 alone, ICPC recovered 32 billion Naira worth of Land, Buildings and Vehicles

.The Buhari Administration is addressing the issue of poor levels of remittance of operating surpluses by MDAs. From remitting only N51 million between 2010 and 2016, JAMB has gone on to remit more than 20 billion Naira to the Federal Government since 2017.

· PICA was set up by the Buhari Administration to strengthen controls over Government finances through a continuous internal audit process across all Ministries, Departments and Agencies (MDAs), particularly in respect of payroll. Through the activities of PICA, more than 54,000 fraudulent payroll entries have been identified and removed, with payroll savings of N200 billion per annum

On August 7, 2015, President Buhari issued a directive to all Ministries, Departments and Agencies (MDAs) to close their accounts with Deposit Money Banks (DMBs) and transfer their balances to the Central Bank of Nigeria on or before 15th September 2015.

· The TSA system was launched in 2012, but failed to gain traction until President Buhari’s executive order in August 2015. As of May 2018, the TSA system has been implemented in 92 percent of all MDAs.

.The TSA allows managers of Government’s finances, including but not limited to the Ministry of Finance and the Office of the Accountant-General of the Federation, to have, at any point in time, a comprehensive overview of cash flows across the entire Government

· This decision to fully operationalize the Treasury Single Account (TSA) system — a public accounting system that enables the Government to manage its finances (revenues and payments) using a single/unified account, or series of linked accounts domiciled at the Central Bank of Nigeria — has resulted in the consolidation of more than 17,000 bank accounts previously spread across DMBs in the country, and in savings of an average of N4 billion monthly in banking charges.

The TSA has brought the following benefits:

o Improves transparency and accountability in the management of all FGN receipts by providing a consolidated view of Government’s cash flow.

o Ensures availability of funds for the execution of government policies, programmes and projects

.The Ministry of Finance continues to fine-tune the system to improve its efficiency, and has also commenced an audit to ensure that all funds due to the TSA are remitted into it.

In spite of great opposition, the Buhari Administration has expanded IPPIS coverage to the Armed Forces, as well as Federal Universities and other academic institutions

Deployment of BVN for Payroll and Social Investment Programmes:

.Considering that personnel costs are the Federal Government’s largest expenditure line, the Federal Government has given priority to the deployment of the BVN for payroll and pension audits. The use of BVN to verify payroll entries on the Integrated Personnel Payroll Information System (IPPIS) platform has so far led to the detection of 54,000 fraudulent payroll entries.

· The Federal Government has also ensured the deployment of BVN system to serve as the verification basis for payments to beneficiaries and vendors in the Anchor Borrowers Programme (ABP), the N-Power Scheme and the Homegrown School Feeding Programme (HGSFP)

· The Federal Ministry of Finance launched the Asset Tracking and Management Project (ATM Project) in 2016. By the ATM Project, the Federal Government is, for the first time, able to locate, identify, assess and evaluate all its moveable and immoveable assets on a real time basis.

· Also, a Central Asset Register was created and domiciled in the Ministry for recording the actual quantity, value, condition and location of all the capital assets belonging to the Federal Government. These initiatives are in line with the requirements of the International Public-Sector Reporting Standard (IPSAS), which has been implemented by the Ministry of Finance.

.In May 2016, President Buhari attended and participated in the International Anti-Corruption Summit organised by the UK Government. At that Summit he pledged that Nigeria would join the OGP, an international transparency, accountability and citizen engagement initiative.

. In July 2016, Nigeria became the 70th country to join the OGP. Following this, Nigeria constituted an OGP National Steering Committee (NSC), which went on to develop a National Action Plan (2017–2019) that aims to deepen and mainstream transparency mechanisms and citizens’ engagement in the management of public resources across all sectors.

.In 2018, Nigeria was elected to lead the OGP, alongside Argentina, France, and Romania. All four new members of the OGP Steering Committee will serve for three years starting on October 1, 2018.

Creation of Efficiency Unit (EU) to spearhead the efficient use of government resources, and ensure reduction in Recurrent Expenditure:

.The Efficiency Unit was set up in November 2015, to reduce wastages, promote efficiency, ensure prudence and add value for money in all government expenditures.

.The Unit monitors Ministries, Departments and Agencies (MDAs) of government, identifying and eliminating wasteful spending, duplication and other inefficiencies, and identifying best practices in procurement and financial management.

.PACAC was established by President Buhari in August 2015 to, among other things; promote the reform agenda of the government on the anti-corruption effort, and advise the present administration in the prosecution of the war against corruption and the implementation of required reforms in Nigeria’s criminal justice system. It was the very first committee the President set up after he was sworn into office.

.PACAC has empowered Judges and Prosecutors to operate effectively in carrying out their responsibilities through Workshops on the new Administration of Criminal Justice Act, 2015.

o Trained both Federal and States Prosecutors on proper drafting of charges.

o Helped anti-corruption agencies devise clearer strategies for obtaining forfeiture of assets suspected to have been acquired fraudulently, mainly from State Coffers, before prosecuting suspected culprits. Part of this work has involved painstakingly reviewing existing Laws (like the Money Laundering Act, 2004, the EFCC Act, 2004 and the ICPC Act, 2000), to identify and highlight sections directly conferring powers of forfeiture on Nigeria’s anticorruption agencies. This advocacy has led to a significant increase in the use of Non-Conviction Based Asset Forfeiture Mechanisms by anti-corruption agencies.

o Organized workshops for the Management and Protection of Assets, and recommended the establishment of a Central Asset Management Committee — the Presidential Committee on Asset Recovery (PCAR), headed by Vice President Yemi Osinbajo, which superintends a dedicated Central Bank Account that receives all recovered funds, for coordination and transparency of management and oversight.

o Drafted a Bill for the establishment of Special Crimes Court

President Muhammadu Buhari signed the Mutual Assistance in Criminal Matters Bill, an Executive Bill, into law in 2019, following passage by the National Assembly. The Bill facilitates the identification, tracing, freezing, restraining, recovery, forfeiture and confiscation of proceeds, property and other instrumentalities of crime, as well as the prosecution of offenders in criminal cases regardless of where in the world they might be

.Nigeria has signed Agreements and MOUs with various countries to boost international cooperation for the investigation, tracking, freezing and return of stolen assets.

.The completion, in 2019, of the first fundamental reform of the Nigeria Prisons Act in almost 50 years, resulting in the establishment of the Nigerian Correctional Service to replace the Nigerian Prisons Service

.Launch of New Prison Information Management System: The Pilot Project was completed at Kuje Prison, and launched in July 2017 with the installation of a new data management system (the first of its kind in any prison in Nigeria), as well as Hardware equipment (computers, server, LAN connectivity, webcams, etc). National rollout being worked on. Deployment will be in 86 Nigeria Correctional Service locations across 16 States.

.Also as part of Criminal Justice Reforms, President Buhari in 2020 granted amnesty to 2,600 prisoners nationwide, representing about 3.5 percent of all inmates, in a bid to decongest Nigeria’s prison population. The beneficiaries were those 60 years and above; those suffering from ill-health that might likely lead to death; convicts serving three years and above and have less than six months to serve; inmates with mental health defect; and inmates with a pending fine not exceeding N50,000 and with no pending cases.