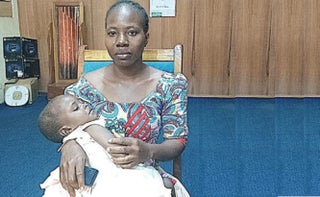 Thirty-five-year old Bose Abiodun, who has four children, spent 25 months in Ilesha Correctional Centre after her husband, Femi – under trial for manslaughter – whom she stood surety for, jumped bail. Abiodun, who had her fourth child in prison, shares her experience with BOLA BAMIGBOLA

What do you do?

I am a native of Ijebu-Jesa in the Oriade Local Government Area of Osun State. I am a tailor and was also doing petty trading alongside before I was put in prison. I am a mother of four children –three boys and a girl. I had the girl while in Ilesha Prison.

What led you to prison?

I stood surety for my husband, Femi Abiodun. He was arrested after he mistook a man for an animal during a hunting expedition and shot the person. The person eventually died. He was a hunter in Ijebu-Jesa.

How did you get involved in the matter?

The matter started in January 2014. He was arrested and arraigned. The court remanded him in Ilesha Prison and he spent a year and some months there. Our lawyer later secured bail for him. But my brother-in-law (husband’s elder brother), Dele, and I had to stand as sureties. While my husband was on bail, we appeared before High Court 6 in Osogbo about three times. Before I was arrested and sent to prison, my husband had stopped going to court.

Didn’t you know about it?

I knew he was no longer going to court. He moved out of the house in December 2017 and till date, I have not seen him. He left me with three kids and quietly ran away.

What did you do after your husband moved out of the house?

In the first few days, I was calling him repeatedly. He used to answer my calls; he would tell me he was working to raise money. He promised to return home as soon as he had some money. But few weeks after, he stopped answering my calls.

What happened after that?

His lawyer came to our house and informed me that my husband and his brother had stopped appearing in court. I was scared but there was nothing I could do. On April 11, 2018, I was arraigned and remanded in Ilesha Prison because the accused I stood surety for had run away.

Before your eventual release, were you not appearing in court?

I was taken to court on May 5 and October 9, 2018. Aside from those two occasions, I was not taken to court. I always asked prison officials for the date my matter would come up, but they used to tell me no date had been picked for the matter.

You had a baby while in prison, how did that happen?

I didn’t know I was pregnant until few days after I was remanded. I took ill and was taken to a clinic inside the prison. After examination, I was told by the officials there that I was few months pregnant.